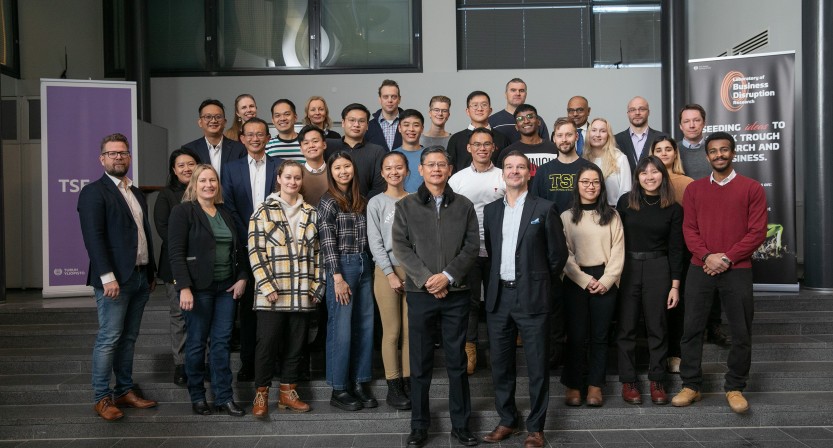 The 3rd Finland-Singapore Maritime Innovation Camp, held between the 12th and 16th of December 2022, was a joint effort between the Turku School of Economics (TSE) of the University of Turku (UTU), and Singapore Maritime Institute (SMI). Talented students from various Finnish and Singaporean universities got together to participate in a one-week fast-paced problem-solving venture based on Google’s Design Sprint. Participants got familiarized with the maritime industry and provided fresh solutions to pilotage challenge statement introduced by maritime corporate partners PSA Marine and Finnpilot Pilotage Oy.

Jouni Saarni, the Development Manager at the Centre for Collaborative Research of Turku School of Economics, and the lead event manager of the FIN-SG Maritime Innovation Camp 2022 set an interesting pool of notable industry partners and stakeholders to deliver the opening lightning talks. Featuring PSA Marine, Singapore Maritime Institute, and the Center of Excellence in Maritime Safety from Singapore, while introducing ESL Shipping, the Finnish Meteorological Institute, Alfons Håkans, and Novia University of Applied Sciences from Finland.

An exciting multi-themed program was ahead of the students this week, with lightning talks from the industry partners on Monday the 12th of December, a visit to Novia UAS premises and operating its top-notch simulators on Tuesday, and a day cruise on board the Viking Glory and Viking Grace with bridge visits on Wednesday. Not to mention the cosy workspace and experienced mentorship provided on Thursday before finally the elegant Gala on Friday in Ruissalon Telakka at the island of Ruissalo near Turku.

The lightning talks kicked off on Monday with Finnpilot’s presentation titled ‘Pilotage and last-mile challenges’ by Capt. Ville Mattila. It was an introduction to pilotage operations and the challenges in communication before and after arrival, as well as emphasising how to get a more precise position and vessel movement measurement tool for the Portable Pilot Unit (PPU).

Singapore Maritime Institute, represented by Ms. Murni Nordin, mesmerised us with an exciting introduction to the Singapore Maritime ecosystem and the well-established maritime cluster of the South-eastern manufacturing giant. The speech highlighted the role of the Innovation ecosystem on R&D and Innovation, and consequently the industry transformation into digitalized solutions. SMI aims, along with its partners, to ‘establish Singapore as a global maritime knowledge hub’.

PSA Marine had a novel input too with the ‘Introduction to Singapore Maritime Pilots’ presentation. They answered the crucial questions of who they are, and what they do. They started by illustrating the five phases of pilotage operations: Receive of Job, Boarding the ship, Pilot Master Exchange (PME), Transmitting, and Berthing.

The speaker Mr. Mike Loh, focused on the last phase of the pilotage and placed the tanker berthing operations under the scope. Tankers exhibit unique operational challenges during berthing such as the non-existent margin of error and the pilot’s overload with monitoring the communication with different parties while actively berthing the vessel. Hence finally raising their challenge statement ‘How to improve tanker berthing operations through technology and communications?’

The Finnish Meteorological Institute also participated with an interesting speech titled ‘Met Ocean services of the Finnish Meteorological Institute’ by Patrick Eriksson, presenting to the students and Singaporean experts the services they provide for the maritime sector and traffic in the Baltic area. Patrick highlighted the significance of the winter navigation services such as operational oceanographic ice services consisting of ice charts, ice forecasts, and weather warnings. Not to mention Arctic analysis products and the Risk Index Outcome which indicates whether ship operations are possible or not in polar areas.

Moreover, the shipping company appearing in this Innovation Camp was ESL Shipping with their speaker Capt. Jussi Vaahtikari delivering a remarkable speech on the challenges and limitations of operational situational awareness during navigation in the harbour area. He illustrated his good arguments through practical examples and real-life scenarios.

Next, Capt. Ashwin Khandke, representing the Centre of Excellence in Maritime Safety, stepped up to deliver a surprising yet insightful speech on fatigue. Opening with the tagline ‘One hand doesn’t clap’, he emphasized on the role of the Master and his/her crew on the pilot’s performance and its direct effect on communication and situational awareness throughout the operations.

After a few words on fatigue management strategy, management of bridge fatigue, layers of protection, and fatigue countermeasures, Capt. Ashwin ended his debut with a profound statement ‘Manage fatigue before it manages you’.

Last but not least, the Finnish tug operator giant Alfons Håkans was the cherry on top with an amusing introduction to the world of tugs and its important role in pilotage operations. The Chairman of the Nautical Technical Committee of European Tug owners Association Capt. Kimmo Lehto addressed the importance of, and the challenges within the communication and situational awareness between the pilot and tug operators throughout pilotage.

On Tuesday, Novia UAS welcomed the group to its campus where Vaklin Angelov, Project leader at Novia RDI, arranged an exciting program for the students and the staff. To start with, the guests were given a short tour around the premises showcasing the Maritime Academy, RDI department, and finally, the maritime training simulation centre before the students were split into pairs of two for simulator runs.

The students were encouraged to steer and navigate the ship in two different scenarios. Open sea and Fairway navigation. Each student was assigned to a role, either a pilot or a helmsman. The pilot would give the helmsman rudder commands as he/she sees appropriate. These runs aimed to mimic and provide the students with hands-on pilotage experience from the bridge, by practicing ship handling and understanding the possible operational shortcomings such as the delay between the helm order and the actual turning of the vessel, and the limited visibility when near berth.

After lunch, the Innovation Camp organizers were proud to welcome Dmitry Rostopshin, Head of Port Operations Solutions at Wärtsilä Voyage, to introduce the group to the prestigious Finnish corporation and its top-notch solutions in the maritime domain. In addition to recognizing and discussing the concept of Just-in-Time (JiT) arrivals, its positive impacts, and the challenges standing in the way of its commercial implementation in the near future.

Finally, in one of Novia’s Maritime Academy classrooms, the students began working on their ideas and continued the Design Sprint journey they started on Monday.

A Design Sprint is a Google Venture’s methodology that provides a swift approach to product innovation and validation. It’s a quick five-day run where a small team of fresh minds target a specific problem, propose solutions, brainstorm, vote on the best, build a prototype and finally pitch their concept and test it with potential customers.[2]

Jouni Saarni and his team managed to utilize the Design Sprint approach and deliver a maritime-modified version of the GV’s hit for the FIN-SG Maritime Innovation Camp. The journey started on Monday before the stakeholder’s lightning talks. The students were asked to focus on familiarizing themselves with the new industry they’re being introduced to and understand the problems and perspectives of the different stakeholders.

Following, the 16 students, divided into 4 teams, kicked off the sprint on Monday with a basic introduction of the different actors or stakeholders in the room. Then, throughout the lightning talks, students individually wrote all the problems and challenges of the different actors on sticky notes. The ‘How Might We’ (HMW) exercise then kicked in where the ‘challenges sticky notes’ from the last step are reframed into opportunistic ‘How Might We’ statements. The teams collected and categorized all the ‘challenge sticky notes’ and the ‘HMW’ statements and brainstormed the possible opportunities for improvement in what is called ‘Affinity Mapping’. Finally, the team members voted on the HMW statement with the most potential. The aim was to feature the most compelling areas to the team.

On Tuesday, the students came back from the simulator runs at Novia UAS fresh and excited to perform. The day continued with the ‘Boot up Note taking’ where students individually reviewed all the lightning talks, information received, ideas, goals, and areas of interest.

Then the facilitators initiated the most interesting phase of their debut, the Crazy 8’s, where each student was to sketch 8 distinct ideas or solutions in 8 minutes based on their Voted HMW statement from Monday. This simple task pushed the students to broaden their horizons and form new ways of thinking. It unlocked their sparkling imagination, allowing the students to have a larger perspective on the problems they are tackling.

The students presented their Crazy 8 sketches to their respective teammates, then voted again on the most compelling ones, before closing the day by individually drawing a detailed mature sketch of their final idea in 3 states of concept.

On Wednesday, the students continued their innovation run onboard the Viking Glory and then Viking Grace where the facilitators arranged a cruise to fuel their spark of creativity and novelty. The group managed to visit the bridges on both vessels and meet the captains/pilots and their crew, observed the berthing operations from onboard, and noticed the uniqueness of navigating within the challenging Turku and Åland archipelagos.

In the conference room, the design sprint was running full ahead. Each team member had 5 minutes to fully present his/her mature sketch to his/her fellow teammates from Tuesday, before voting once again on the final concept. Finally, the teams pitched their ideas for the first time to the facilitators prior to making the final decision on what concept to develop tomorrow.

Thursday was the final day before the pitching. The teams focused on concept maturation, concept development, assigning tasks, leverage of skills as a team, and storyboarding. Besides, the teams were assisted by a versatile team of mentors and experts for guidance, and more importantly validation of their ideas, before finally preparing the pitch for tomorrow’s stage debut.

Here the FIN-SG Maritime Innovation Camp is reaching its last milestone in Restaurant Tenlén at the Ruissalon Telakka on the magnificent island of Ruissalo near Turku. Numerous representatives from the Finnish maritime ecosystem attended the Friday Gala forming a spectacular and appealing audience for the teams, where the students pitched their findings in front of the panel members calling an end to the Design Sprint’s tremendous run! 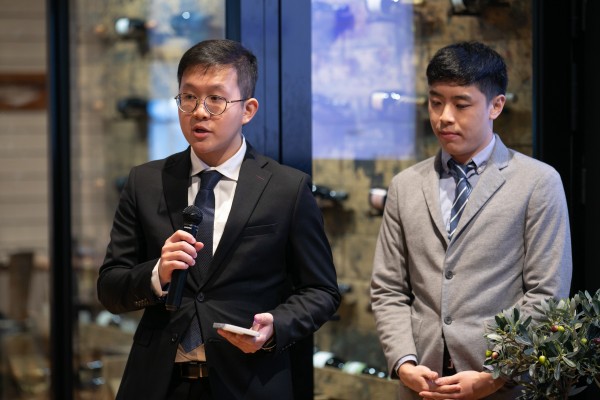 The group got acquainted with the Ruissalon Telakka history and Kimmo Lehto featuring again with an interesting talk about the origin of Alfons Håkans corporation and their fleet of tugs. Not to mention a brief introduction to the ice-breaking operations.

Singapore Maritime Institute and PSA Marine, honoured to be a part of this occasion, thanked the students, industry partners, the audience, and finally Jouni Saarni and the organising team members from Turku School of Economics of the University of Turku for the good collaboration and the successful event, hoping to continue this fruitful partnership in the future, and marking the last scene of the 3rd FIN-SG Maritime Innovation Camp 2022.