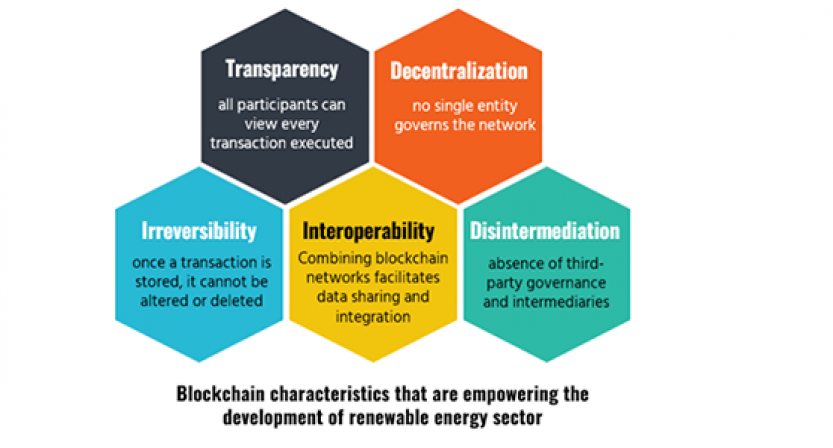 The energy sector is undergoing rapid transformation to accommodate the growing amount of integrated renewable energy generation and therefore is on the verge of passing into a complex digital era. A transition to a more sustainable energy system and contributing to the circular economy necessitates extremely high investment costs and establishing infrastructures. Intelligent and real-time control mechanisms are therefore needed, which is progressively challenging since the energy sector is becoming more distributed, heterogeneous, and multi-agent.

Integration of the Internet of Things (IoT), Artificial Intelligence (AI), and Blockchain technology pave the way for a new generation of energy. The applications of IoT in renewable energy generation include sensor devices that are facilitating the process of production, transmission and distribution of energy. These sensors assist energy producers to monitor and manage the operation of the utility equipment remotely in real-time. This leads to lowered operational costs and reduces reliance on the already constrained fossil fuels. Analytics and data processing solutions such as AI and machine learning enable power suppliers to detect trends and patterns related to energy generation and consumption. This will help energy suppliers to rationalize the distribution of energy and therefore reduce energy imbalance.

In addition, blockchain technology has the potential to revolutionise the renewable energy business in a variety of ways from verifying the source of clean energy to making power grids more accessible through transparent data-sharing in real-time and enabling secure transactions between parties. Blockchain is an immutable decentralised platform that enables the process of recording transactions and tracking assets (both tangible and intangible assets) in a shared network. Blockchain technology is a distributed ledger for creating trusted data on the network connected through peer-to-peer nodes. Hence, blockchain is ideal for securing and sharing that information because it provides real-time, shared and completely transparent information deposited on an immutable ledger to the members of the network. 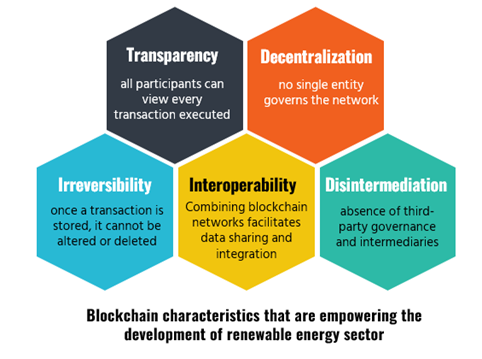 The shift toward generating and using clean energy sources (such as solar, wind, and hydrogen) already delivered a variety of advantages over fossil fuels. The application of IoT, AI, and blockchain will help the utilization of these greener energy sources to a further extent. The following section reviews the role of digital solutions such as IoT, AI and Blockchain in the renewable energy sector advancements. The focus of this article is on the potential of digitalization in transforming the renewable energy sector and hence discussions of technical aspects and challenges are out of the scope of this article. 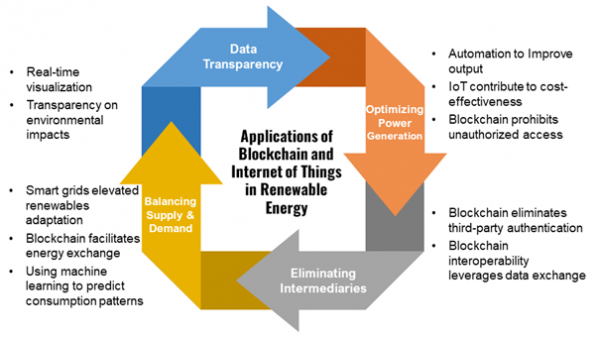 Efficiency in energy production proved to be a significant barrier to capturing renewable energy. This is particularly important for renewable technologies that rely on variable resources, such as wind and solar energy. The IoT-enabled solutions allow for the introduction of automated controls to increase efficiency with various power generation technologies. The fusion of IoT sensors can improve the reliability of renewable energy systems and facilitate optimised energy production. For instance, IoT devices can be employed to remotely regulate and monitor solar panel tracker systems to reach optimum energy production. Analytical solutions can be used to track the movement of the sun and adjust the angle of solar panels accordingly. Likewise, the data generated by IoT sensors in wind systems can be used to adjust the direction of the wind turbines for achieving maximum efficiency. This improves output production and lowers operating costs. Energy suppliers are facing high energy costs and a lower margin of profits. Any cost-cutting and efficiency improvement potentials in the operation of energy supplies, as well as consumption, can be significant.

Moreover, IoT-enabled renewable systems can be integrated with authentication and control mechanisms (e.g., through distributed technologies such as blockchain) to prohibit unauthorized access to critical applications. This enhances the overall safety of the entire power system by permitting merely legitimate users to operate on important datasets.

The traditional energy grids are unreliable in transmission and distribution systems since they only support the one-way allocation of uniform energy from power plants. The revolutionary development of smart grids enabled by IoT sensors has accelerated the rise of renewable energy production. They provide crucial advantages in terms of power consumption monitoring and real-time alerts, allowing energy utilities to include renewable sources for energy distribution. IoT-enabled smart grids enable automatic shifts between renewables and traditional power plants to prevent interruptions in the power supply. Moreover, with the use of blockchain technology, it will be possible to exchange surplus energy (e.g., excess energy produced from farmers' solar panels) with those who need it. This promotes circular economic growth and shifts toward the concept of a ‘sharing economy’. A sharing economy is a socio-economic system in which underutilized assets or resources are shared among many individuals or enterprises.

Energy imbalances may arise from delays due to long processes of reconciliation, volume discounting uncertainties, and regulatory confirmation. Blockchain technology has the potential to reduce delays (and hence costs), triggering a more reliable and efficient energy system. Blockchain facilitates the energy grid's operation through data-sharing in real-time and permitting transactions between different production sites, consequently improving power allocation efficiency. Electricity suppliers can analyze IoT-generated data to make data-driven business decisions. Analyzing real-time consumption data using machine learning and artificial intelligence helps electricity suppliers to predict power consumption patterns of peak load demand. Then, the use of smart grids enables distribution companies to control the power plant’s production during off-peak periods. This eventually leads to a balance in the supply based on the demands of consumers and hence limits the emission of toxic substances into the environment.

It could become feasible, with the utilization of blockchain technology (and other distributed systems), to eliminate intermediaries. As a decentralized system, there is no single authority responsible for the accuracy of the information entered, though, all network participants contribute to the establishment of consensus.

Blockchain can also improve system efficiency by standardizing regulatory reporting conditions and data structures across a multitude of enterprises. One of the major challenges in green energy supply is the additional overhead costs associated with generating renewable energy for example certification documenting costs. Blockchain technology can verify the source of renewable energy and hence accelerate its widespread usage because the additional proving costs can be eliminated, consequently reducing the prices of renewable energy for end-users. Energy production and consumption records can be stored securely on a blockchain network and can be validated in real-time without being tampered with. These records can be used as evidence instead of a certificate mechanism and potentially diminish the need for evidence generation costs. The records provide evidence instead of a certificate; therefore, the blockchain system can potentially reduce the evidence generation costs considerably through full digitalization of the measurements and documenting processes currently being conducted by field staff. Blockchain, therefore, has the potential to minimize the number of intermediaries, facilitate interoperability, and ensure the integrity of the transactions in the power supply system. Despite the great gains (such as visibility, tamper-resistance, and automation), blockchain has to improve technical challenges such as energy consumption, scalability and the possibility of being hacked.

Data analytics and visualization tools improve transparency in users’ power consumption. With visualization tools, consumers can easily find out how much of their power comes from renewable energy sources. Analytics extract insights from IoT data and create illustrative charts and indices accessible on dashboards and mobile apps. Thus, households get a better understanding of their usage history and modify it accordingly.

Moreover, sustainability is increasingly becoming important to all stakeholders, including consumers, regulators, and companies. The energy sector is seen as the primary source of global greenhouse gas (GHG) emissions, accounting for roughly 65 per cent of total GHG discharges worldwide[1]. Renewable energy must be derived from natural sources that be replenished with little GHGs emissions released. Hence, stakeholders need to learn about the sustainability performance of the energy they consume, or the energy used in the production of different products. At the same time, they have to tussle with greenwashing and self-congratulatory communication. Blockchain technology can be used to generate trustworthy data to be shared across actors involved in the supply chain and eliminate the need for a third-party assurance mechanism. Increasing visibility and transparency in the source of green energy would have a great impact on consumers’ support and willingness to pay. Blockchain can provide information on the origin of renewable energy and its carbon footprint index. Blockchain-based reporting applications enable enterprises to compile verifiable data and produce reliable reports that demonstrate their sustainability credentials.

Notably, a blockchain is devised to facilitate data authentication and ensure data security. Its decentralised immutable nature plays the role of a ledger to transmit the data acquired from devices to the blockchain network, which fulfils both privacy and transparency. Moreover, a blockchain framework can incorporate a smart contract mechanism to verify the consistency between the acquired data and the final sustainability report. Thus, blockchain offers the platform needed to support data transparency, while also allowing data standardization.

The provision of more affordable energy while halving energy sector emissions by 2030, following the Paris Agreement[2], is not a simple process. A comprehensive transformation is needed, driven by decarbonized (i.e., using renewables) and resilience approaches, supported by processes that are ready to embrace these changes and provide sustainable and affordable energy.

With the proliferation of clean energy sources, the energy sector is becoming more complex and decentralized. Digitalization is progressively considered a solution to these issues and becoming an integral part of the energy sector. However, distributed monitoring and management tools are needed to keep pace with these decentralization and digitization trends. Potentially transformative digital technologies and solutions for the renewable energy sector include the Internet of Things (IoT), Artificial Intelligence (AI) and Blockchain technology.

The Internet of Things has already promoted the adoption of solar and wind energy. Though, its implementations are yet to be realized for other novel renewable sources such as geothermal, biogas, and hydroelectric power plants. IoT devices can be used for optimum energy generation. Equipping with intelligent sensors and the development of Smart Grids enables collecting data in real-time, to rationalize the allocation of energy. The provision of clean energy tends to be unstable which particularly puts power distributor companies in a challenging situation since they need to purchase a certain capacity of electricity in advance. Smart grids enabled by IoT systems provide risk diversification by delivering a high-speed power interchange mechanism. The smart grids with real-time monitoring signals support the varying nature of renewable energy and ensure an uninterrupted power supply.

Blockchain technology (with integration with IoT and artificial intelligence) could potentially offer solutions to cut costs by optimizing data processing, enhancing integrity in terms of information security and eventually facilitating the production of renewable energy. It helps make smart grids more efficient through data-sharing in real-time and enabling safe transactions between two enterprises. In addition, network interoperability enables the development of new services that leverage the benefits of multiple blockchain networks simultaneously. Blockchain can also act as a supporting platform that could promote sustainability and decarbonization in energy supply. It can be used for certifying the source of renewable energy and allocating these assets to an explicit point of consumption. Moreover, blockchain decentralization could reduce the burden on one trustworthy centralized authority when dealing with multiple parties in complex jurisdictions and documentation.

The application of IoT and blockchain in the energy sector is considered the most promising. However, many potentially transformative digital energy solutions are still in their early stages, requiring further investment and research to realize their full potential.

[2] UN (2021). Theme Report on Energy Transition: Towards the Achievement of SDG 7 and Net-zero Emissions, Department of Economic and Social Affairs. Available at:

The blogpost has been reviewed by Novia's editorial board and accepted for publication on 5.10.2022.