The column has been published in Vaasa Insider, July 2022.

It is very tempting to know which technology is best compared to another. This has been one of the questions in my and my colleagues’ mind from the beginning of the H2 Ecosystem Roadmap project.

The more we dig into it, the more we have come to the conclusion that it is not an ”apples to apples” comparison. Hydrogen and lithium-ion batteries have a similar purpose but are two different technologies with their own advantages and disadvantages.

When we talk about energy storage systems, a few main scenarios come to mind:

Also, economy and scalability play a significant role for a technology to be widely used.

One of the major advantages of batteries over hydrogen as energy storage is that fuel production efficiency and overall efficiency from production to usage are higher. Figure 1 compares the efficiency of two types of vehicles. 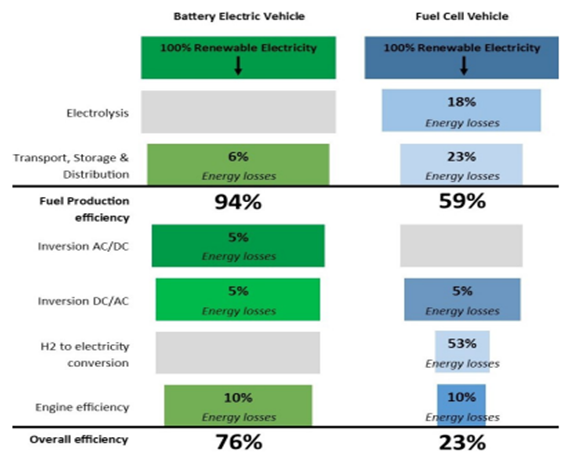 Even though the comparison has been done for vehicles, we can still see that the losses are much greater in fuel production in hydrogen technology. One should keep in mind that some of the heat losses can be utilized in the form of heat energy, which will increase the efficiency of the overall process for hydrogen production. However, more than 40 percent of the electrical energy is already lost during the production of hydrogen through electrolysis.

One important question that this figure does not explain is how much energy is required to produce the batteries and how sustainable is it to mass produce batteries. One should also not forget to question the sustainability of the process of making fuel cells and electrolyzers. More in-depth research is needed on these questions if we are going to compare these two technologies as apples to apples.

On the other hand, hydrogen seems to have a major advantage to batteries when it comes to energy storage for a long period of time and has the potential to store a large amount of energy in an already existing cavern. Salt caverns, exhausted oil and gas fields can all provide underground hydrogen storage on an industrial scale.

Storing hydrogen in a cavern is the most expensive option but also the most suitable one. Operational experiences of cavern-based hydrogen storage are limited to a few locations in Europe. HyStock hydrogen storage in the Netherlands and HyPSTER in France are some projects aiming to demonstrate the ability of industrial-scale hydrogen storage.

Hydrogen also has the light-weight advantage

Compressed hydrogen and fuel cells can provide electricity to a vehicle traction motor with weights that are much less than batteries. From figure 2, one can see that extra battery weight to increase the range requires extra structural weight, heavier brakes, a larger traction motor, and in turn more batteries to carry around the extra mass. 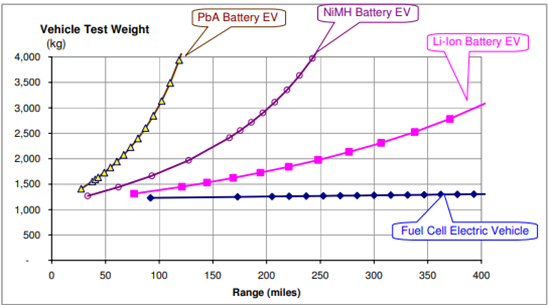 This is one drawback of battery-power electric vehicles. Hydrogen offers a promising solution to this problem and could be best suited for heavy-duty transport, aviation, and shipping.

It should also be noted that after 80% of depth of discharge, the voltage drops sharply for LFP, as shown in figure 3. This implies that only around 80% of the battery capacity can be used. It is also generally suggested not to fully discharge LFP batteries to increase their life and overall health, which further suggests that we cannot use 100% capacity of batteries if installed as energy storage. 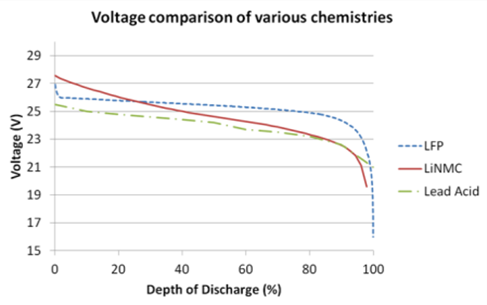 Figure 3: The voltage of each chemistry relative to its capacity for various 24 V packs (source)

My overall thoughts from literature review are that there is no ”silver bullet” solution to storing energy. In case of passenger cars and small energy storage systems, batteries can be declared as the winner of the two. When it comes to industrial-scale energy storage as well as fuel for heavy transport and aviation, hydrogen seem to win the battle.

These are two different technologies that cannot be compared as apples to apples. Both technologies will play a vital role in our future carbon neutral society.