The writer Cynthia Söderbacka is a project manager at Novia UAS specialising in energy storage. In this column, she presents an ongoing project looking to turn Ostrobothnian waste into biogas, fertilizers, and other useful resources.

The ever-increasing global population causes stress on natural resources calling for promoting circular economy and optimizing value chains in ecosystem so that there is energy and resource recovery in the waste streams as much as possible. Waste is a global challenge and also a problematic resource because it is not homogeneous. However, various technologies exist today that are used in waste management, recovering energy and resources as byproducts.

Stormossen and Recomill, together with Novia UAS, Åbo Akademi University and the University of Vaasa (VEBIC), are exploring opportunities for energy and resource recovery with hydrothermal carbonization of sewage sludge digestate using an HTC pilot located at Stormossen. The one-year project is funded by the European Regional Development Fund (ERDF) under the Regional Council of Ostrobothnia.

Hydrothermal carbonization (HTC) is an imitation of the natural formation of coal by reacting high moisture biomass in a reactor at elevated temperatures between 180-250°C. The pressure is temperature dependent and ranges between 10-35 Bars. The process can last from half an hour to several hours. Whilst the technology is old, it is relatively new for Finland.

Hydrothermal carbonization (HTC) is an imitation of the natural formation of coal by reacting high moisture biomass in a reactor at elevated temperatures between 180-250°C. The pressure is temperature dependent and ranges between 10-35 Bars. The process can last from half an hour to several hours. Whilst the technology is old, it is relatively new for Finland.

The end-product is a carbon-rich hydrochar slurry which is further dewatered with the process water (water after dewatering) as a byproduct. The sewage sludge digestate (i.e. what remains after producing biogas) at Stormossen ends with composting, where it is later used as soil for landscaping only due to the nature of some harmful sewage sludge substances.

If the sewage sludge digestate is instead converted into carbon-rich hydrochar, it can be used as a solid fuel for energy, in soil amendment or as an adsorbent.

Exploring the wide-ranging potential of hydrochar

Understanding limitations with natural resources, this technology overcomes geographical barriers. One does not need a coal mine to produce hydrochar, one needs waste, and the feedstocks are not limited to sewage sludge, but various types of biomasses can also be used.

For the process water, Stormossen hopes to know if this process makes it better or worse for the wastewater treatment process and can if it be reused in the production of biogas. Novia UAS and VEBIC are carrying out tests in Technobothnia Education and Research Center for that.

VEBIC will further look whether liquid fuels could be separated from this process water and use in engines in the Engine Laboratory. VEBIC first analyses fuel properties in its Fuel Laboratory. Åbo Akademi University is more focused on the analysis of hydrochar as a solid fuel, process simulation and material and energy balances. 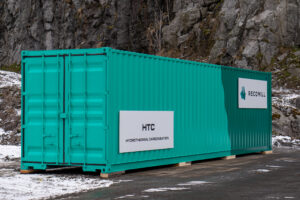 The RECOMILL HTC Test Plant mobile pilot has been in operation for two months.

Novia UAS and RECOMILL have been carrying out on-site tests. Each performed test has worked better than the previous one. RECOMILL is ready to demonstrate the operation and engage those with interests in energy, Waste Management and agricultural sectors for further tests with various biomasses.

The characteristics of the hydrochar are determined by the process parameters, such as the time spent in the reactor and temperature. Though several tests have been carried out, we are so far unable to say which parameters favor which application, as samples are yet to be analyzed and characterized.

The possibilities for hydrochar are not just limited to the above-mentioned applications. Activated hydrochar has potential to be further used as filter material, additive in the steel industry and maybe even as cathode material for the battery industry.

Jan Hägg of RECOMILL further adds that, ”the reject water can potentially increase the biogas yield and can also be converted to valuable ammonium-nitrogen fertilizers which is a hot topic today, taking into consideration the heavy price increase of fertilizers.”

HTC is a proven technology and is definitely a game-changer for organic waste handling.